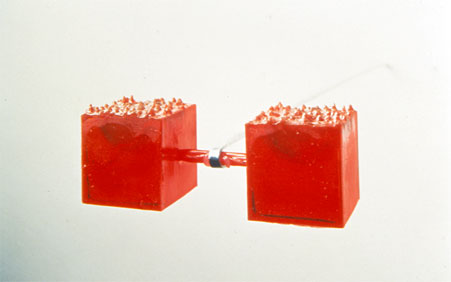 “Michael Joaquin Grey’s work possesses a conceptual grandeur that draws together the complexity of genetic theory, the prospect of artificial life, and the awesome beauty of nature. His art explores the transitions between various states of energy, matter and meaning. The sculptor highlights the recapitulation of such phenomena in divergent forms and functions, while questioning the processes by which those forms and functions gain scientific or aesthetic significance.”[1]

“In 1990 Grey and collaborator Randolph Huff created the sculpture, Gametes, which is related to the third structural principle.”[1]

“Inside two one-inch laser-cured resin cubes connected by a slender rod, the artists used computer-controlled stereolithography to inscribe a series of cubes in spheres for some twenty-three iterations – a cube in a sphere in a cube in a sphere, and so on twenty three times – resulting in an iterative, 3-D, mandala-like structure. The surface on top of the cubes is marked by peaks and valleys generated by genetic algorithms, suggesting that microcosmic tectonic plates have been shifted as a result of the mystical seismic activity within. The artist says of his work, ‘the liberty to create and perpetuate both thoughts and life is a double-edged sword, a practice which is deeply and beautifully subjective and human. It is this awareness of the ontogeny of a process that can illuminate how simple formal or objective decisions over several generations or iterations can lead to complex problems which are not innocent of social meaning or responsibility.'”[2]