“The Animal, Vegetable, Mineralness of Everything” by Ken Feingold

(A short description of this piece has been posted here on AEM-OC.)

"The Animal, Vegetable, Mineralness of Everything" by Ken Feingold is an animatronic sculpture that consists of three talking heads surrounding a bulbous object. Each head has a distinct "personality", and they make conversations between themselves and about the object at the center. The piece was on view from September 10 through October 23, 2004, at the Grossman Gallery of the School of the Museum of Fine Arts, Boston, Massachusetts [1].

In the piece, all three of the heads have very similar external appearances, but each of them was assigned a certain set of vocabulary, habits, so as to give the impression of distinct "personalities". As per the title of the piece, the heads are called "animal", "vegetable", or "mineral" mind, while the black sculpture in the center is simply referred to as "that thing". The conversations between the heads revolve around their fear of each other, the nature of violence and the sculpture in front of them. They would seem to hear and respond to each other, carrying the conversation forward in a jaggedly manner, but over time, each head would revert back to its own particular set of interests. The responses of each head are generated in real-time by a computer program using a predefined set of rules, which also take into account the "personality" of each head. As a result, every time the heads talk, the dialog will be different, but the speaking style will be consistent for each head.

Ken Feingold is an American artist whose works examines "the relation between the self and the real, as reflected in media images and new technologies". His recent works consists of "a series of complex interactive installations that merge advanced interactive computer applications with theoretical strategies" [2]. Speaking of his approach to art, Feingold stated:

"My approach to A.I. questions has more to do with the nature of human communication and personality, and thinking about our behaviors that, in some ways, involve no thought at all – especially the interior psychological dimensions, and the mechanisms of the unconscious mind.  I am interested in the gaps that open when communication fails, when words have no meanings but only associative values, when memory has only a few moments duration, when we are 'on automatic'."[3]

Then speaking specifically about "The Aminal, Vegetable, Mineralness of Everything", Feingold identified his inspiration as coming from ventriloquism, in which he is quite taken with the "ability to project a personality into something…the psychoanalytic notion of projection where you take something and put it into somebody else". The heads were deliberately constructed so that they are realistic enough for people to relate to them, while remaining patently artificial so as to take on a certain "uncanniness": they look like they might be human, but then there is no human that could look like that. The experience of a viewer being in the space of this work is one of active interpretation and projection: "You are projecting your mind into the scene somewhere" [4]. 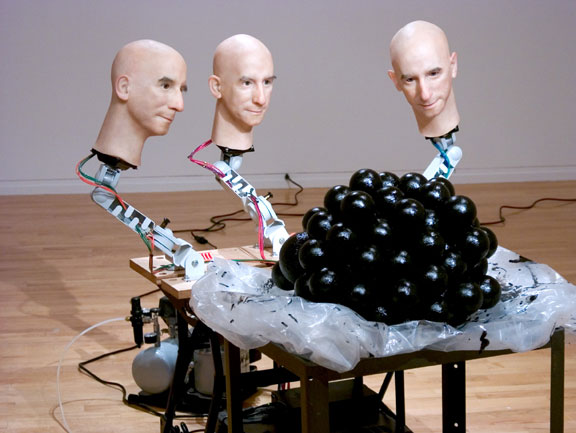 The piece does not only converse with itself, but it also forms a mental dialog with the viewer, in which it acts as "behavioral trigger" that activates in the viewers "responses of a polemical or social kind encouraging in the audience changes in individual or group behaviour by questioning preconceptions, destroying illusions by means of the shock of unfamiliar, absurd or incongruous imagery" [5]. Humankind has the tendency to ascribe the particular features of our own thoughts onto other objects, or in other words, anthropomorphize other entities. The conversation between the talking heads in this piece is no more than algorithmically generated snippets of data, but a viewer might not even hesitate to project onto the heads certain internal mental processes that may or may not be present in the electronics of the piece.

In fact, this very question of consciousness has been formalized as a test for artificial intelligence, known as the Turing test. In this test, a panel of judge will interact with a human subject, and then a computer program, through a text interface. The task of the judges is then to determine which is the human, and which is the computer program. A computer program is said to have passed the Turing test when the judges cannot distinguish it from a real human, that is, the judges' choices are no better than a random pick. Evidently, this is a test about communications, what it tells us about the party that it is being conversed with, as well as the party that initiated the conversation.

Having mentioned the Turing test, there is a difference between the work here and the ability of computers as examined in the Turing test. A comparison with another of Ken Feingold's work might illuminate this divergence of ideas. In 1999, under the commission of the Kiasma Museum of Contemporary Art in Helsinski, Feingold created a piece called "Head". This piece is essentially a realistic human head that can engage in conversations with visitors, and whose neuroses (the piece), or conversational flaws, were used to great effect in instilling a certain "personality" to the isolated head [3]. 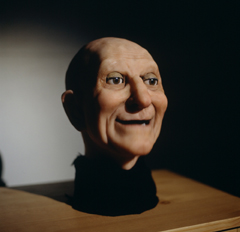 In the piece just described, the visitors can be compared to a judge in a quasi-Turing test, in which the identity of the other conversationalist is revealed to be a computer program, but it still attempts (and very well succeed) to inspire the viewer to anthropomorphize the piece. In "The Animal, Vegetable, Mineralness of Everything", the actual conversation happens between different parts of the piece while the viewer plays the part of a bemused onlooker, who nonetheless is somewhat unsettled in recognizing his/her tendency to project a psychological dimension to the objects. The fact that the heads engage in empty conversations based simply on context-less rules and non-sequiturs might matter less than that they are communicating.