The Sheep Market is a web-based artwork that uses the ‘Amazon Mechanical Turk’ (MTurk) system to get thousands of workers involved in the creation of a massive database of drawings.

Amazon’s Mechanical Turk is a crowd-sourcing marketplace intended for corporate use. It is based on the idea that certain tasks are simple for people, yet difficult for computers. Corporations can put these simple tasks online; these vary from translating a paragraph, to giving your opinion about the design of a website. This way, workers can choose from thousands of tasks and get paid for it. The workers will remain alienated from the larger processes they are contributing to, though, because they only have one simple task to focus on.

Aaron Koblin used this system for his artwork. He requested workers to create a vision of a sheep facing to the left using a simple drawing tool. The workers received only two cents for their labor, and weren’t allowed to create more than five sheep. But despite this low wage, Koblin received 10.000 sheep in only 40 days. He closed down the system after these 40 days, but began to receive hand drawn sheep and requests to add new sheep to the lot. It seems that the workers are/were driven by other motivations than money. 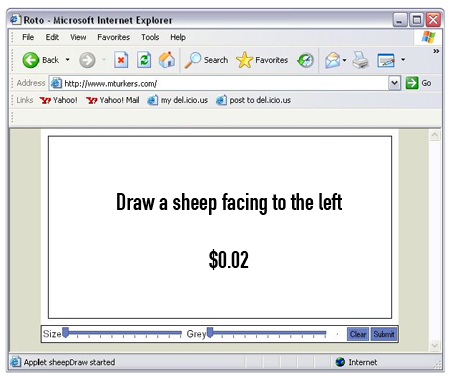 Koblin’s inspiration for ‘The Sheep Market’ was to try and exploit human creativity, while at the same time shedding light on the insignificant role each worker plays as part of a whole.  But Koblin was mostly curious how workers would respond to his absurd task: “When I saw the first sheep come through the system I knew I had made the right decision. As I had hoped each sheep truly reflected the individual and humanity behind it.” [1]

The workers, who came predominantly from the United States, provided the following statistics [3]:

After collecting all the sheep, Koblin tried to present his database. The first form in which he presented ‘The Sheep Market’ was by printing the sheep on collectable stamps, which  were grouped in blocks of twenty (just like the traditional methods of counting sheep). Koblin tried to overwhelm the viewer by putting all the stamps on display, which also invited the viewer to investigate the work more closely.

The second form in which he presented ‘The Sheep Market’ was with a conveyer-like system which drew the sheep onto the screen with the original stroke order used by the artist. This display had a more ‘industrial feel’.

Finally, Koblin decided to present the sheep in an online format that allowed viewing of the entire group as a whole, as well as the possibility to browse the individual sheep and witness their creation process. Also, the sheep can be purchased on the website which, at first, created a relatively hostile response. The creators of the sheep didn’t really agree with this idea; it opened up a discussion on creative ownership. This online format can be found on: http://www.thesheepmarket.com/

The last unanswered question is of course: why sheep? Koblin states that he has many reasons for this. He explains: “Sheep have played an important role in the development of civilization. One of the first animals to be domesticated and used for utility and consumption, the sheep has maintained a relatively central role throughout social evolution.” [4] He also refers to ‘Le Petit Prince’ by Antoine de Saint-Exupery which incorporates images of sheep as a pivotal point in the narrative, and he also refers to the sheep Dolly, which was the first mammal to be cloned. But these references can be read in more detail in Koblin’s thesis document, which can be downloaded from his website.