In the early 1970s, Tom Sherman’s work focused on the form and definition of sculpture. In 1973, Sherman became very interested in radio waves and how they interact with each other and with humans. [1] As his facination with radios grew, he decided that he wanted to build a “shelter” or a “radio-free” environment to test signal strength. He essentially made a six-foot cube that was free of electromagnetic radiation. He named these safe cubes, Faraday Cages.[2]

Thus began the birth of Faraday Cages being placed within gallery spaces. He explains his Faraday Cages (image right) as indoor, portable laboratories that allow him to run further experiments within the gallery space. With this aspect of the piece, this cage becomes an interesting work of art that viewers can experience real-time as Sherman is working. Some could see this piece as performance art, but when Tom Sherman was not busy experimenting, the large metal box would stand alone in the gallery space. Even on it’s own the box would still have a huge impact on viewers within the gallery setting. When the Faraday Cage is open, viewers in the gallery are able to enter this “safe house” that closes off the viewer from “outside distractions.” This whole theory of creating a getaway from everyday distractions is much more common now, due to social networks, emails, and constant contact, than it was when this cage was built in 1973. 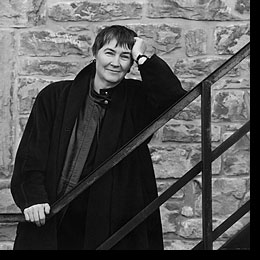 This same theory inspired the works of Catherine Richards in her version called the Curiosity Cabinet at the End of the Millennium. With Richards work, she was very fascinated with how surrounded we are with mixed media, advertising, and visual pollution in everyday life. So much so that we need to sometimes get away form all of that and realize that we rely on those things too much. The box created by Catherine Richards was much smaller than Sherman’s Faraday Cage. 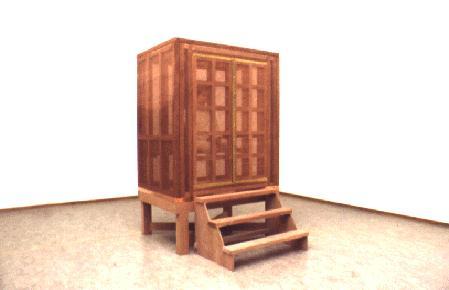 [3] Her Cabinet works very similar to Sherman’s Cage, in dealing with electromagnetic fields and allowing the user to interact with the space. The user is allowed to climb into the Curiosity Cabinet at the End of the Millennium. Closing the door creates a closed circuit. With the box completely closed, the metal outer “webbing” serves as a shield from outer interference from the magnetic and electrical wavelength that surrounds us in everyday life. The outside of the cabinet is wired with thin copper wiring connected to larger copper wiring which is grounded through copper pipes.[4]

These two great examples of “safe houses” opens the eyes of viewers as they interact with electromagnetic fiends in everyday life and also reminds us to “unplug” ourselves from society’s threshold.