Song of the Phenomena

[video src=https://youtu.be/pcvVotT2XQo] Chris Henschke is an Australian digital artist who studies scientific concepts like physics, sound and light, and other phenomena. He and Mark Boland, an Australian Synchrotron physicist, collaborated on an exhibit called "Song of the Phenomena", which was displayed in the Royal Melbourne Institute of Technology Gallery in 2016. "Song of the Phenomena" includes a machine that is activated by the atomic radiating particles emitting from decomposing fruit and converted into sound. The machine was once used to calibrate radiation oncology treatments.

scale is an interspecies art project: an audience-interactive installation that involves nocturnal electric fish from the Amazon River Basin. Twelve different species of these fish comprise a ‘choir’ whose sonified electrical fields provide the source tones for an immersive audiovisual environment. The fish are housed in individual tanks configured in a custom-built arc of aluminum […]

Bicycle Built For 2,000 is a collaborative artwork in the form of a song comprised of 2,088 voice recordings collected via Amazon’s Mechanical Turk web service. Workers were prompted to listen to a short sound clip, then record themselves imitating what they heard. The recorded sound clips were collected and organized into the original pattern.

“Man With A Movie Camera:the Global Remake” by Perry Bard 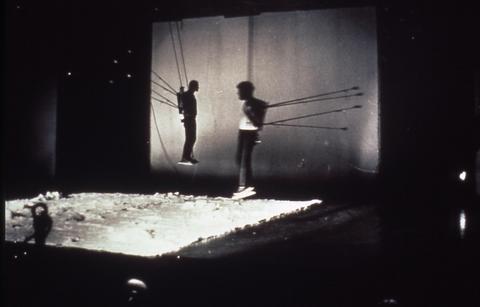 Perhaps the most influential event joining art and technology in the 1960s, 9 evenings was held in October 1966 in New York. “Is There Love in the Telematic Embrace?” (excerpt with link to longer text)